Peninsula Valdes is a World Heritage Site and nature reserve teeming with wildlife: land, sea and air. A variety of tours are offered to provide unique and intimate interaction with these amazing creatures, or take guidance from our concierge and use your own vehicle to explore the peninsula independently. Expect to see:

Several penguin colonies are easily accessed from the gravel roads of the peninsula. Or visit the historic San Lorenzo sheep farm offering several kilometers of pristine coastline and a breeding colony of approximately 500,000 Magellanic penguins.

Witness these playful creatures up close from a comfortable Zodiac boat that leaves from the fishing port of Rawson, via the mouth of the Chubut River.

Océano Patagonia is nestled walking distance from the closest sea lion colony, and several other colonies exist throughout the reserve.

Peninsula Valdez and the Chubut River are home to a wide variety of birds, at least 181 species in total, such as: the oystercatcher, king and olivaceous cormorant, crested duck, northern shoveller, antarctic pigeon, and kelp and brown-hooded gulls. Depending on the time of year, our guest may also see different species of tern, night black crowned herons, ruddy-headed geese and black skimmers, among others.

The inner part of the peninsula is inhabited by a variety of animals including: rheas (a relative of the African ostrich), guanacos (related to the llama), dwarf armadillos, southern grey foxes, and maras (a large hare-like animal). 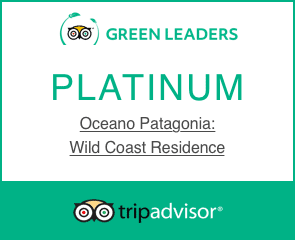 Open chat
¡Hola! ¿Cómo podemos ayudarte? Hi! How can we help you?